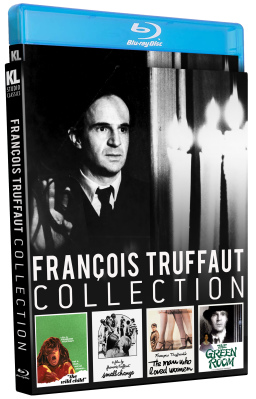 This 2-disc Blu-ray collection presents four films by legendary filmmaker François Truffaut, one of the French New Wave’s brilliant architects. THE WILD CHILD (1970) – In a most mature and aesthetic achievement, Truffaut creates an absorbing drama, delicate and unpredictable as life itself. Based on the true account of 18th-century doctor Jean-Marc-Gaspard Itard, the film follows the capture of a young boy who is discovered living like an animal in the forest. Truffaut himself gives a memorable performance as Itard, unyielding in his belief that the child, played with haunting precision by Jean-Pierre Cargol, can be transformed into a civilized being. SMALL CHANGE (1976) – Truffaut weaves his love of kids and cinema seamlessly together in this tribute to the joys, yearnings, pains and wonders of childhood. The film presents a group of ten youngsters, boys and girls, whose adventures in the quaint village of Thiers illustrate—from the first baby bottle to the first kiss—the different stages of passage from early childhood to adolescence. Also known as Pocket Money, this kaleidoscopic coming-of-age tale finds Truffaut at his most charming and insightful. THE MAN WHO LOVED WOMEN (1977) – This irresistibly sophisticated comedy paints the delirious portrait of saturnine satyr Bertrand Morane (Charles Denner), who worships the feminine spirit—the idea of woman. Truffaut neither condemns nor glorifies him, for what could be so worthy of a subject of obsession as women? The film is a splendid example of the auteur’s nimble way with stories of erotic love. Featuring screen goddesses Brigette Fossey, Nelly Borgeaud, Geneviève Fortanel, Nathalie Baye and Leslie Caron. THE GREEN ROOM (1978) – In a most personal and rigorous film, Truffaut stars as Julien Davenne, a man who so loves the dead that he can no longer love the living. While building a shrine to his deceased wife, he meets Cecilia (Nathalie Baye), who is also in mourning. She falls in love with him, thereby giving him a last chance at resurrection. Also known as The Vanishing Fiancée and based on the writings of Henry James, this classic film is a somber, haunting parable of life and death—and the barrier of memory that stands between.

In French with Optional English Subtitles