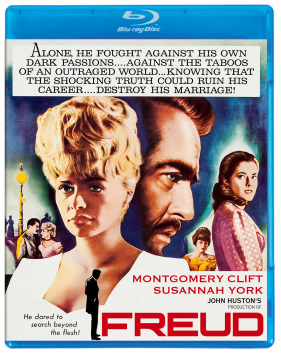 From the legendary John Huston, the director of The Maltese Falcon, The Treasure of the Sierra Madre, The African Queen, Moby Dick, The Misfits and Prizzi’s Honor, comes this compelling biopic starring the incomparable Montgomery Clift (Indiscretion of an American Wife) as the renowned Austrian neurologist Sigmund Freud. The film follows Freud’s descent into a region almost as black as Hell itself—man’s unconscious—as he develops the notion that neurosis stems from sexual repression. By treating patients with various issues, including a woman haunted by recurring dreams (Susannah York, The Killing of Sister George) and a man with an Oedipus complex (David McCallum, The Great Escape), Freud experiences epiphanies that lead to the birth of modern analysis, despite the scorn his theories initially receive from his colleagues. Garnering Oscar nominations for its score by Jerry Goldsmith (Lonely Are the Brave) and screenplay by Charles Kaufman and Wolfgang Reinhardt (its original script was by French philosopher Jean-Paul Sartre), and featuring evocative black-and-white cinematography by Douglas Slocombe (Raiders of the Lost Ark), Freud also-known-as Freud: The Secret Passion delivers a penetrating character study of the father of psychoanalytical psychiatry.

TRAILERS FROM HELL with Howard Rodman