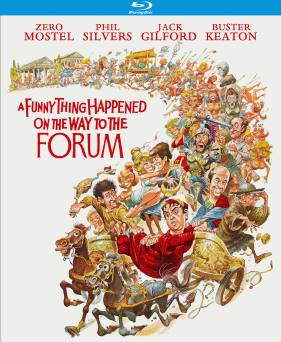 Funny Thing Happened on the Way to the Forum (Blu-ray)

Something appealing. Something appalling. Something for everyone a comedy tonight! "One of the hottest burlesque shows that ever hit Broadway" (Time) comes to the screen showcasing the enormous talents of Zero Mostel, Phil Silvers, Jack Gilford, Buster Keaton and Michael Crawford (Broadway's The Phantom of the Opera). Featuring keenly clever tunes like "Comedy Tonight" and "Lovely," this wild Stephen Sondheim musical about a raucous gaggle of ancient Romans is a "flip, glib and sophisticated, yet rump-slapping bawdy and fast-paced look at the seamy underside of classical Rome through hipster's shades" (Variety). When a wily, witty, lying, lazy, cheating slave discovers that his master's son is in love with the girl next door; a virgin courtesan, he promises to help win her heart in exchange for his freedom. But the road to romance is blocked with stunning surprises, cunning disguises and the wildest chariot race ever! Nominated for Best Adaptation or Treatment Score.