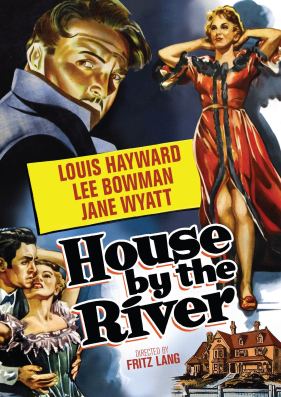 Victorian ne'er-do-well Stephen Byrne (Louis Hayward) assaults and murders his wife's virginal housekeeper. With the reluctant assistance of loyal brother John (Lee Bowman), Stephen remorselessly consigns the girl's corpse to the river. But as John's affection for Stephen's wife Marjorie (Jane Wyatt), police suspicion about the girl's disappearance, and the depths of Stephen's depravity all escalate, the river itself provokes a horrifying reunion between victim and murderer. By House by the River's climax, "melodrama is transformed into a work of art [and] a moral nightmare" (Lang biographer Lotte Eisner).

Boasting an ingenious script by Spiral Staircase scribe Mel Dinelli and evocative photography by Edward Cronjager (I Wake Up Screaming), House by the River is a criminally underrated American Grand Guignol that belies its modest origins.

"[Scarlet Street and House by the River] Both are indispensable for admirers of the great German filmmaker." - Dave Kehr, The New York Times

"...plot details hardly matter in the face of Lang's enveloping visual style, in which shadow corridors and billowing curtains transform what looks like a standing hotel set from a Republic western into an expressionist nightmare." - Dave Kehr, The New York Times