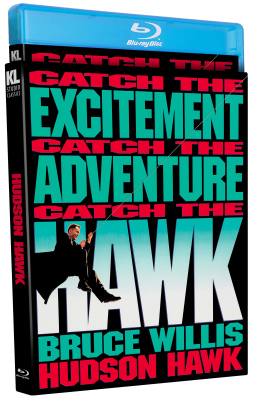 Bruce Willis (Die Hard), Danny Aiello (Do the Right Thing) and Andie MacDowell (Groundhog Day) star in the funniest action/adventure/comedy ever! Willis is Eddie “the Hawk” Hawkins, the world’s most famous cat burglar, who, after 10 years in prison, is ready to go straight. But it’s not going to be easy for the Hawk. The mob and the CIA have conspired to blackmail Eddie and his partner (Aiello) into stealing three da Vinci masterpieces from the most heavily-guarded museums in the world. Sounds simple, right? WRONG! While trying to steal the goods, Hawk falls in love with a beautiful but schizophrenic nun (MacDowell) and is relentlessly pursued by the greedy and powerful Minerva (Sandra Bernhard, The King of Comedy) and Darwin Mayflower (Richard E. Grant, Withnail & I), who want the masterpieces as part of their twisted plot to ruin the world’s economy. It’s wall-to-wall action as the wise-cracking Hawk attempts to save the world, win the girl and have the last laugh! Directed by Michael Lehmann (Heathers) and featuring James Coburn (The President’s Analyst), David Caruso (Jade) and Frank Stallone (Ten Little Indians).

My Journey to Minerva: Featurette with Actress Sandra Bernhard (10:57)