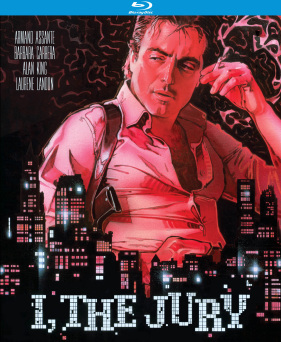 The tough guy hero of the 40s and the excitement of the 80s come together in this dazzling remake of the classic Mickey Spillane (The Girl Hunters) thriller, I, THE JURY. Straight from the school of the hard-boiled detective comes private eye, Mike Hammer – played by the ruggedly sexy Armand Assante (Q&A). Hammer sets out to get the guys who did in his friend Jack – his quest for vengeance leads him onto the paths of the CIA, a sexy doctor and a kinky killer. All along the way, there are spectacular chases and incredible excitement. Richard T. Heffron (Futureworld) directed this first-rate action-packed thriller with a screenplay by Larry Cohen (Maniac Cop) and a strong supporting cast featuring Barbara Carrera (Never Say Never Again), Laurene Landon (…All the Marbles), Alan King (Casino), Geoffrey Lewis (Thunderbolt and Lightfoot), Paul Sorvino (Goodfellas) and Judson Scott (TV’s The Colbys and V).