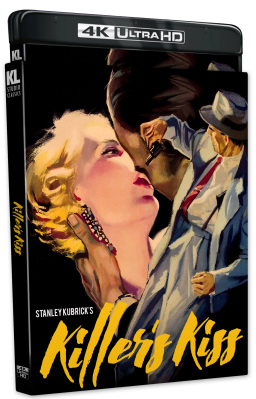 Like a one-man studio, the legendary Stanley Kubrick (The Killing, The Shining) co-wrote, co-produced, shot, edited and directed his second feature, the dazzling film noir Killer’s Kiss. Down-and-out New York City boxer Davey Gordon (Jamie Smith) strikes up a romance with nightclub dancer Gloria Price (Irene Kane). Their budding relationship is violently interrupted by Gloria’s boss, Vincent Rapallo (Frank Silvera), who has eyes for his employee. When Vincent and his thugs abduct Gloria, Davey is forced to search for her among the most squalid corners of the city, with his enemy hiding in the shadows. Killer’s Kiss provides a fascinating look into the early work of a man who would soon become one of the world’s most important and influential filmmakers, and it’s a remarkable achievement in its own right: the boxing match may be the most vicious this side of Raging Bull, and the famed final battle remains an action tour-de-force.