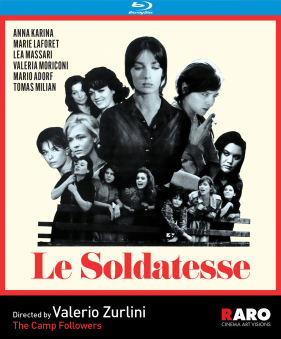 Le Soldatesse (The Camp Followers) is a heartbreakingly moving wartime drama starring the luminous Anna Karina (Pierrot le Fou, Alphaville) and directed by the great Valerio Zurlini (The Desert of the Tartars, Family Portrait). Lieutenant Martino (Tomas Milian) can no longer stand the death and disease surrounding him in Athens, and puts in a request to be relocated. So along with Sergeant Castagnoli (Mario Adorf) he is tasked with delivering twelve prostitutes to various military outposts across the Axis territory. It is an unpleasant task, made even more so by the fascistic Major Alessi (Aca Gavric), who they pick up along the way. Karina plays Elenitza, a soft spoken prostitute who develops a sympathetic relationship with Martino. Alessi becomes increasinglyunhinged during the journey, becoming a violent and maniacal supporter of the Blackshirts, whose brutal tactics tear the group apart.

Introduction by Marco Müller, professor at the Shanghai Film Academy and former director of the Venice and Rome film festivals

Note: This title is not released with an o-card/sleeve