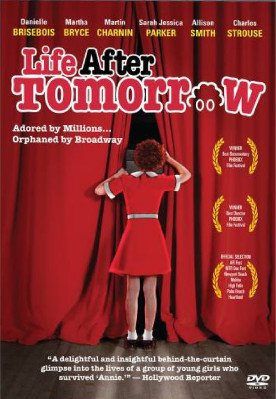 LIFE AFTER TOMORROW reunites more than 40 of the women who played orphans in the Broadway production of "Annie" and reveals the highs and lows of their experiences as child actresses in a cultural phenomenon. As one cast member remarks, "It's not like you are getting downsized at 50...you're 12!" Featuring behind-the-curtain footage from the original Broadway production and performances with the reunited orphans, plus interviews with the creators of "Annie," composer Charles Strouse and director/lyricist Martin Charnin, and appearances by Sarah Jessica Parker, Dara Brown, Martha Byrne, Allison Smith, and more. Directed and produced by Julie Stevens and Gil Cates, Jr.