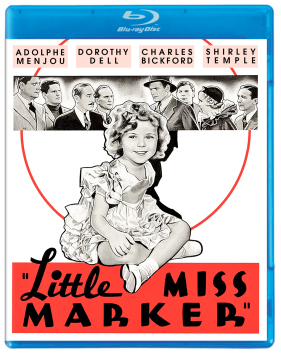 In one of her earliest and most popular roles, the adorable Shirley Temple (Now and Forever) single-handedly melts the hearts of a gang of hardened gamblers when she is left as an IOU or “marker” for a debt. Adolphe Menjou (The Front Page) stars as a jaded head bookie, “Sorrowful” Jones, who winds up playing reluctant papa to the curly-topped waif and soon falls under her spell. Helping Sorrowful with the rigors of instant fatherhood is the beautiful Bangles Carson (Dorothy Dell, Wharf Angel), a nightclub singer whose racketeer boyfriend Big Steve (Charles Bickford, White Woman) is big trouble! Based on a story by Damon Runyon (Guys and Dolls) and directed by Alexander Hall (Torch Singer, Goin’ to Town), this heartwarming tale of love, faith and new beginnings will delight the whole family and make you believe in miracles!