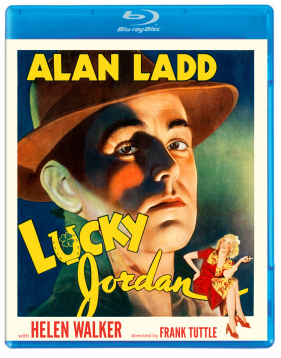 Screen great Alan Ladd (China, O.S.S., Calcutta, Shane) stars as a wise guy who finds himself in one predicament after another in Lucky Jordan. When he discovers that he can no longer avoid the draft, a self-serving New York racketeer (Ladd) fails at his half-hearted attempt at military life. He goes AWOL, stealing a car that happens to contain a briefcase full of valuable military plans. What follows is an escapade filled with Nazi spies, espionage, assassins, saboteurs…and a beautiful member of the WAC determined to reform the gangster. Directed by Frank Tuttle (This Gun for Hire) and co-starring Helen Walker (Murder, He Says), Lucky Jordan is tough…trigger mad…and terrific!