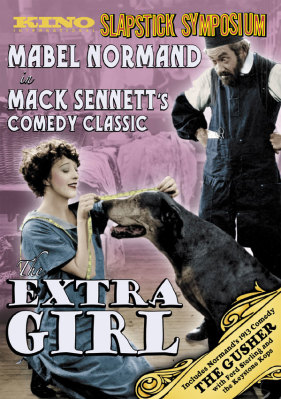 Mabel Normand (THE EXTRA GIRL and THE GUSHER) (DVD)

In 1923, slapstick pioneer Mack Sennett conceived and produced a feature-length film designed to showcase the homespun appeal and comedic prowess of Mabel Normand, who had been a fixture on the madcap screen for more than a decade.

THE EXTRA GIRL follows the misadventures of Sue Graham, a small-town lass who escapes her romantic entanglements by heading for the green pastures of Hollywood. Sue quickly discovers that the dream factory is just a factory like any other, as she is assigned to duty in the wardrobe department. But through pluck and ambition, she manages to overcome every setback, including one hair-raising sequence in which she accidentally unleashes a man-eating lion on the studio backlot.

This Kino DVD also includes the rare 1913 short THE GUSHER, mastered from an archival 35mm print with the original color tints. Set in the oil fields of California, it follows the efforts of a wily con artist to defraud a yokel (Ford Sterling) and his bride-to-be (Normand).