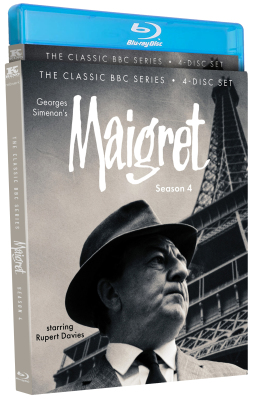 Long-awaited and unseen anywhere for decades, Georges Simenon’s Maigret (1960-1963) is the definitive adaptation of Georges Simenon’s world famous novels. This BBC television production stars Rupert Davies as Commissaire Jules Maigret, the dogged French detective. Though Simenon’s books have been adapted many times, Davies’s celebrated, BAFTA-winning portrayal won the approval of Simenon himself, who stated: "At last, I have found the perfect Maigret!" This four disc-set includes all 13 episodes of Season 4, in which Maigret reckons with “The Fontenay Murders”, “The Crime at Lock 14”, and various other vexing cases that only the moody Maigret can solve. Georges Simenon’s Maigret has been remastered in High Definition from original film elements and is featured here in its original fullscreen TV format.

“The State of Maigret”: Restoration Notes