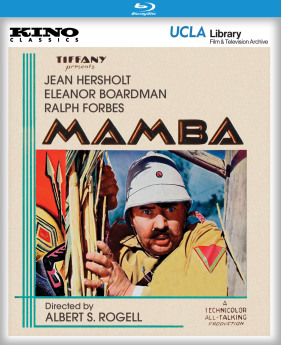 An exotic adventure set among ivory traders and military officers in Colonial East Africa, MAMBA stars Jean Hersholt as a corrupt land-owner who battles a German officer (Ralph Forbes) over the honor of a young woman (Eleanor Boardman). But the romantic triangle is shattered when the indigenous population mounts an epic assault upon its oppressors. Billed as the first feature-length all-talking Technicolor drama, MAMBA was an bold attempt by the low-budget Tiffany Productions to compete with the major studios. For decades it was considered a lost film, until an original print was discovered in Australia. Photochemically preserved and digitally restored, this edition reveals that MAMBA is much more than a curiosity item; it is a film of remarkable artistic ambition, with such diverse influences as Erich von Stroheim’s sexually frank melodramas and the “unchained camera” of the German silent cinema.

Interview with Paul Brennan on the rediscovery and restoration of Mamba, excerpted from the documentary Splice Here: A Projected Odyssey, by Rob Murphy

Theatre of Dreams, a documentary short on Murray and Pat Matthews, the Australian film collectors who discovered the sole surviving print of Mamba