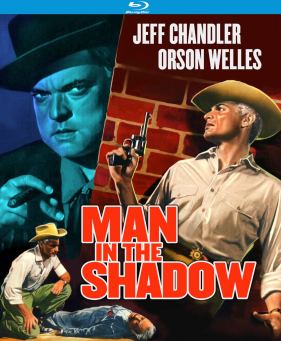 Man in the Shadow (Blu-ray)

From Jack Arnold, the acclaimed director of It Came from Outer Space, The Glass Web, Creature from the Black Lagoon, Tarantula, The Incredible Shrinking Man and No Name on the Bullet, comes this action-packed thriller starring Jeff Chandler (Ten Seconds to Hell, Red Ball Express) and Orson Welles (Touch of Evil, The Stranger). “Unless we go back to being beasts, there’s got to be law for everybody.” This stand is taken by sheriff Ben Sadler (Chandler) when the brutal murder of a Mexican farm worker is covered up by those who fear its perpetrator: powerful land baron Virgil Renchler (Welles). As owner of the Golden Empire ranch, the formidable Renchler makes his own rules… and a town that needs his business obeys them. But Ben believes in justice, and with the entire county against him, he fights a lonely and dangerous battle. He’s up against a master manipulator, and after a few attempts on the sheriff’s life, suspense mounts steadily to a showdown in which only one man can win. A modern-day western with bite and social significance, Man in the Shadow (also known as Pay the Devil) teems with atmosphere and features top-notch performances by its two leads.

"Man in the Shadow has Jack Arnold's economy but turns out to be a good genre picture (even if the genre is less-defined). Welles adds gravitas, Chandler is excellent and there are many effective supporting players.  Conflict, racism, power, corruption, murder and many more themes are explored to varying degrees. Super Blu-ray from Kino with impressive a/v and a highly informative commentary. We give this a strong recommendation! "