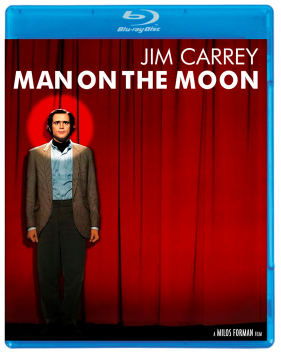 In this acclaimed biopic from director Miloš Forman (One Flew Over the Cuckoo’s Nest, Amadeus), Jim Carrey (Eternal Sunshine of the Spotless Mind) disappears into the role of the late Andy Kaufman—considered the most innovative, eccentric and enigmatic comic of his time. A master at manipulating audiences, Kaufman could generate belly laughs, stony silences, tears or brawls. Whether inviting the audience out for milk and cookies or challenging women to intergender wrestling matches, he specialized in creating performances so real that even his close friends were never sure where the truth lay. Also starring Danny DeVito (Get Shorty) as Kaufman’s manager, Courtney Love (The People vs. Larry Flynt) as the woman Andy falls in love with and Paul Giamatti (Sideways) as his best friend. You’ll stand up and cheer for Carrey’s hilariously uncanny performance that “may be a better Andy Kaufman than Andy Kaufman” (Newsweek).

• THIS MIGHT BE A STORY...: Screenwriters Scott Alexander & Larry Karaszewski in Conversation with Milos Forman (An Excerpt from a Recently Recovered 1999 Micro-Cassette Recording of the Director and Screenwriters of MAN ON THE MOON Discussing the Film and the Craft of the Biopic) (22:01)

• R.E.M. Music Video: The Great Beyond