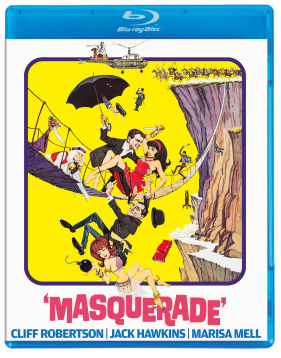 The fun starts when they take their cloaks and daggers off! From Basil Dearden, the acclaimed director of The Captive Heart, The Blue Lamp, Pool of London, The Mind Benders and Woman of Straw, comes the tongue-in-cheek spy caper Masquerade. The British government is in negotiations with the Middle Eastern oil-rich nation of Ramaut to allow in British drilling agencies, but Ramaut withdraws from the talks, leaving Britain desperate. British Colonel Drexel (Jack Hawkins, When Eight Bells Toll) is enlisted in a covert operation to kidnap the Ramaut prince, Jamil (Christopher Witty, The Railway Children), in order to force an oil agreement between the countries. Drexel brings in American David Frazer (Cliff Robertson, Charly) to assist, but Frazer finds someone else has plans for Jamil. Marisa Mell (Danger: Diabolik), Michel Piccoli (Max and the Junkmen), Bill Fraser (Diamonds for Breakfast) and Charles Gray (The Mirror Crack’d) co-star in this rollicking spy spoof. Michael Relph (The Man Who Haunted Himself) and the legendary William Goldman (Butch Cassidy and the Sundance Kid) adapted the screenplay from the novel Castle Minerva by Vincent Canning (Golden Salamander).