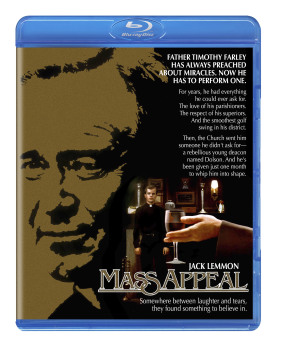 Should a priest tell his congregation what they want to hear instead of the truth? Mass Appeal stars screen legend Jack Lemmon (Save the Tiger, The China Syndrome, Missing) as Father Tim Farley, a complacent priest in a wealthy suburban parish who drives a Mercedes and cracks jokes from the pulpit. When idealistic Mark Dolson (Željko Ivanek, The Sender, In Bruges), a radical seminarian, accuses him of “song and dance theology,” the result is a head-on clash that teaches each man the true meaning of faith. Outstanding performances from Lemmon, Ivanek and Charles Durning (True Confessions, The Rosary Murders) as an inflexible monsignor make Mass Appeal a humorous and compelling duel of conscience and compromise. Directed by TV and film veteran Glenn Jordan (Only When I Laugh, The Buddy System).