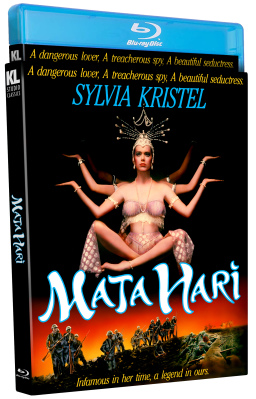 From cult filmmaker Curtis Harrington (Night Tide, Queen of Blood, Whoever Slew Auntie Roo?) and producers Golan-Globus (Runaway Train) comes this torrid tale of deception, desire…and double agents. Dutch goddess Sylvia Kristel (Emmanuelle Trilogy, The Nude Bomb) is the ultimate spy-vamp, Mata Hari. There has been no name more notorious, no eye more lethal, in the history of international seductresses. The daughter of a sacred dancer, Mata Hari tours the capitals of Europe with her hypnotically profane version of Java’s ritualistic choreography. It is her destiny to beguile men and women alike, in an era when the shadow of World War I endangers every liaison. When she takes as lovers two former friends, a German and a Frenchman, now enemies by the war, she becomes a pawn in their deadly cat-and-mouse intrigues. From the Folies Bergère in Paris to the sinister Fraulein Doktor’s office in Berlin to an orgiastic party in Madrid, Mata Hari weaves her spell between enemy camps and between satin sheets leaving behind her broken hearts…and lifeless bodies. The stellar cast include Oliver Tobias (The Stud, Arabian Adventure), Christopher Cazenove (Heat and Dust, Aces: Iron Eagle III), Gottfried John (Goldeneye,The Ogre) and Vernon Dobtcheff (The Day of the Jackal, Jude).