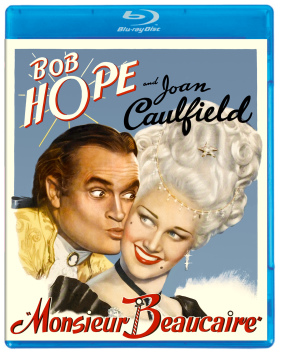 The French court will never be the same when Bob Hope gets through with it! A barber in the court of King Louis XV, Monsieur Beaucaire (Hope, My Favorite Brunette), falls in love with a beautiful maid (Joan Caulfield, Larceny). When the king has had enough of the inept barber’s shenanigans, Beaucaire is led to the guillotine where he is about to lose his head! Luckily for him, the Duc de Chandre (Patric Knowles, The Bride Wore Boots) rescues Beaucaire from his inevitable fate, transporting him to the Spanish court. However, when he later poses as a nobleman, it seems he may have pushed his luck a little too far. Featuring lavish costumes and sets, this classic comedy directed by Hollywood great George Marshall (The Ghost Breakers) showcases Bob Hope at his finest. Melvin Frank (My Favorite Blonde) and Norman Panama (The Court Jester) adapted the screenplay from Booth Tarkington’s (The Magnificent Ambersons) novel, with Marjorie Reynolds (Holiday Inn), Cecil Kellaway (Unconquered), Joseph Schildkraut (The Shop Around the Corner), Reginald Owen (The Good Fairy), Constance Collier (Rope) and Hillary Brooke (Road to Utopia) rounding out the wonderful cast.