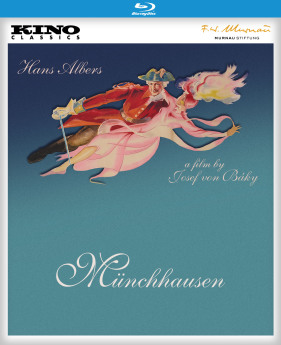 In early 1943, just as Nazi Germany began its collapse with the surrender at Stalingrad, the famed Ufa Studios released an elaborate super-spectacle to celebrate the company's 25th anniversary. Produced at the enormous cost of 6.5 million Reichsmarks, and filmed in Agfacolor, MUNCHHAUSEN was the bizarre Nazi response to such extravaganzas as Britain's The Thief of Bagdad and Hollywood's The Wizard of Oz, both of which were jealously admired by Propaganda Minister Goebbels. Starring Hans Albers, the hypnotic, blond superstar (who kept a Jewish lover safely in London), and a bevy of female stars, the film was meant to divert a German public, and those in occupied Europe, then experiencing aerial bombardment as well as extensive military casualties.

This lavish, impudent, adult fairy tale takes the viewer from 18th-century Braunschweig to St. Petersburg, Constantinople, Venice, and then to the moon using ingenious special effects, stunning location shooting, and a rich color palette, supervised by cameraman Konstantin Irmen-Tschet, who had worked for Fritz Lang in earlier Ufa films. Escaping the grim reality of the time with the illusion of luxury and pure fantasy (and a lovely score by Georg Haentzschel), MUNCHHAUSEN daringly glorifies a braggart and liar, and was scripted by the banned Jewish author Erich Kustner under a pseudonym. The Nazi censors deemed the film 'artistically' but not 'politically' valuable; perhaps the sight of a man-hungry Catherine the Great (Brigitte Horney), topless harem girls, and a vacation-pretty Venetian Grand Canal in glorious color were thought a bit rich for audiences under grim wartime restrictions.

For this release by Kino on Video, MUNCHHAUSEN was digitally restored by the F.W. Murnau Foundation.

Documentary on the production and restoration

"If you are a fan of this type of fantasy entertainment - its absolutely recommended!"