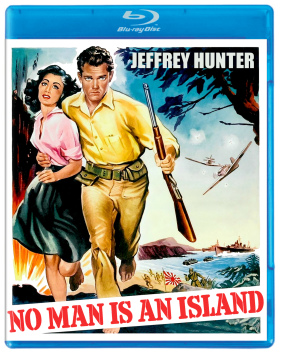 No Man is an Island (Blu-ray)

December 7, 1941. Navy man George Tweed (Jeffrey Hunter, The Searchers, A Kiss Before Dying) is ecstatic to be spending his last day on Guam after receiving his discharge papers. But this is the day “which will live in infamy,” as America—and Tweed—are suddenly thrust into global conflict with the Japanese bombing attack on Pearl Harbor. At this fateful moment, all American military personnel on Guam are either killed or surrender to the invading Japanese forces. All, except for five seamen who escape into the mountains. One by one they are tracked down and killed. There’s only one survivor: Tweed. Alone, hungry and hunted by the enemy, he begins a heroic ordeal that lasts almost three years. Co-starring Marshall Thompson (To Hell and Back) and introducing the “Audrey Hepburn of the Philippines,” Barbara Perez, No Man Is an Island is an incredible true story filled with action, thrills and ultimately, love.