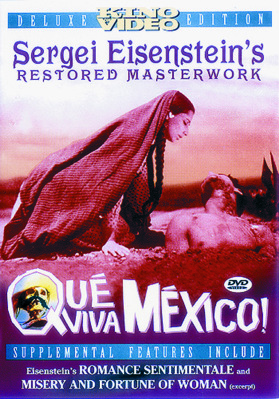 Having revolutionized film editing through such masterworks of montage as Potemkin and Strike, Soviet director Sergei Eisenstein emigrated west in hopes of testing the capabilities of the American film industry. Quickly ostracized from Hollywood, Eisenstein, Grigory Alexandrov and photographer Eduard Tisse (at the urging of author Upton Sinclair) wandered south of the border where they began filming a highly stylized documentary on the people and volatile social climate of Mexico. Unfortunately, a lack of funds prohibited the film's completion and the famed director was unable to edit the film. In 1979, by referring to Eisenstein's extensive notes and sketches, Alexandrov assembled the most definitive version of the film; as close to Eisenstein's vision as one is ever likely to see.

A blend of the ethnographic, the political, the scenic and the surreal, Qué Viva México! is nothing short of brilliant and remains superior to the legion of films it strongly influenced: Orson Welles' It's All True, Allejandro Jodorowsky's El Topo and the works of Sergio Leone. With sequences devoted to the Eden-like land of Tehuantepec, the savage majesty of the bullfight, the struggles of the noble peasant and the hypnotic imagery of the Day of the Dead, Qué Viva México! is a vivid tapestry of Mexican life which, thanks to Alexandrov's careful restoration, takes its rightful place alongside Eisenstein's other legendary works.