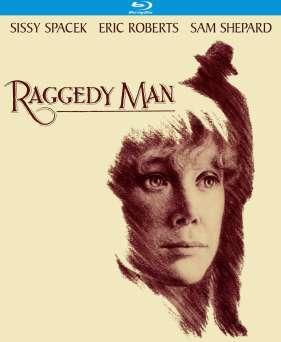 Sometimes it takes a stranger to give you the courage to follow your heart! Sissy Spacek (Coal Miner’s Daughter, Carrie, The River) stars in this bittersweet drama about a young mother, her two sons and the mysterious benefactor who touches them all. Frustrated by her dead-end job as a telephone operator and divorced from her drunken second husband (Sam Shepard, Country, The Right Stuff), Nita (Spacek) finds comfort and understanding in the arms of a passing sailor (Eric Roberts, Runaway Train, Star 80). When he leaves, Nita resolves to pick up her boys and start a new life. But first she must confront backstabbing townspeople and the violent Triplett brothers in this suspense-tinged story of being scared, being alone, being in love and being strong enough to face the truth. Written by William D. Wittliff (Legends of the Fall) and directed by veteran production designer/art director Jack Fisk (Violets Are Blue…), Raggedy Man co-stars R.G. Armstrong (White Lightning), Henry Thomas (The Quest) and as the terrifying Triplett brothers, William Sanderson (Blade Runner) and Tracey Walter (The Hunter).