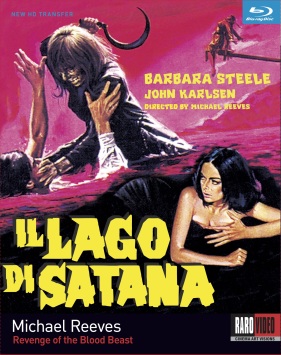 Revenge of The Blood Beast (Blu-ray)

A tale of demonic reincarnation reminiscent of Mario Bava’s Black Sunday, Revenge of the Blood Beast (Il lago di Satana, aka The She Beast) stars Barbara Steele as Veronica, a British tourist who is stranded in a remote village with her husband Philip (Ian Ogilvy) while honeymooning in Transylvania. They meet a descendent of legendary vampire-hunter Count von Helsing (John Karlsen), who reveals that the town is haunted by a satanic curse. A mysterious car accident plunges Veronica into a nearby lake, but when her body is removed, it resembles that of the legendary “Witch of the Lake.” Reawakened from her slumber, the blister-faced hag, armed with sickle and claws, rises from the makeshift morgue and unleashes her vengeance upon the descendants of those who executed her, centuries earlier. While the bumbling Soviet authorities stumble over themselves to solve the murders, Philip join forces with von Helsing to capture the witch and put an end to the dreadful curse. Director Michael Reeves (Witchfinder General) mixes gruesome thrills with dark comedy (courtesy of character actor Mel Welles as a devious hotel owner), to make Revenge of the Blood Beast an especially playful entry in the Euro Horror genre.

Revenge of The Blood Beast

Revenge of The Blood Beast