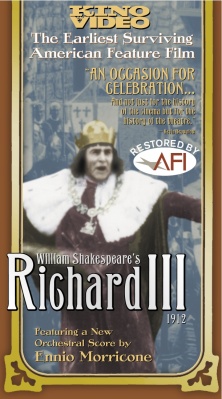 An astounding rediscovery of the cinema, Richard III is the earliest surviving American feature film, newly unearthed and restored to its original brilliance by The American Film Institute with a haunting score by composer Ennio Morricone.

Produced as a vehicle for Frderick Warde, a legendary stage actor of the 19th Century, Richard III was the most ambitious Shakespearean adaptation to date. The film not only attempts to honor the intricacies of the original play, it flavors the drama with spectacular crowd scenes and rich color tints. Richard III offers a fresh glimpse of a time in history when Shakespeare wasn't strictly the domain of scholars but was a source of popular entertainment, "when Americans didn't have to be spoon-fed a great dramatist but were united in their passion for one who gave them characters who mirrored their own complex humanity, not to mention sublime poetry, along with requisite doses of sex and violence." (Frank Rich, The New York Times)
Product Extras :
Publish Date : 0000-00-00