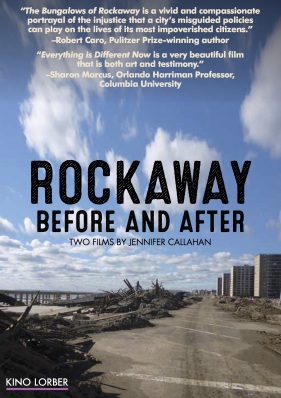 Rockaway: Before and After (DVD)

A pair of one-hour features on a single disc, Rockaway: Before and After chronicles the epic highs and epic lows of New York City's only oceanfront community. Film critic William Wolf calls both films, "a captivating double achievement."

A popular summer resort, a rival to Coney Island, once existed along the Rockaway shore, replete with wide beaches, a long boardwalk and honky-tonk amusements. The first bungalow went up in Rockaway in 1905; by 1933 over 7000 covered the peninsula. For decades, the bungalows were affordable summer rentals for working-class vacationers, largely Jewish and Irish immigrant families. Today fewer than 450 bungalows remain.

Narrated by Academy-Award-winning Estelle Parsons and completed in 2010, the film tracks the lifeline of the Rockaway bungalows. Sparkling, funny, and sometimes moving interviews with former bungalow residents bring the bungalow heyday to life; a trove of archival stills and unseen footage from the 20s, 30s, and 40s, such as that of the Marx Brothers and their families frolicking on Rockaway beaches, show viewers what a delightful and treasured summer experience Rockaway was for thousands of immigrant families.

Feature Two: Everything Is Different Now: Rockaway After The Storm (2015, RT: 53 min)

In October, 2012, Superstorm Sandy tore into New York and woke the city up to the fragility of its shorelines. Everything Is Different Now: Rockaway After the Storm documents the first summer and fall after the storm as the urban beach community re-builds, re-thinks, and re-invents.

The Bungalows of Rockaway

"The Bungalows of Rockaway, the documentary by the gifted filmmaker Jennifer Callahan, is an incisive analysis of urban policy making, and at the same time a vivid and compassionate portrayal of the injustice that a city's misguided policies can play on the lives of its most impoverished citizens."

– - Robert Caro, Pulitzer-Prize winning author
"The Bungalows of Rockaway is a fascinating and very interesting, unusual account." – - William Wolf, film critic
"The Bungalows of Rockaway is perfect--very informative, intelligent and warm. It's part of a much larger story: what happened to working-class New York City? This is an exemplary job of filmmaking." – - Phillip Lopate, award-winning writer and film critic

Everything Is Different Now: Rockaway After The Storm

"A valuable contribution to New Yorkiana and urbanism in general, this beautifully shot and intelligently balanced film charts the metamorphosis of neighborhood into community, thanks to natural disaster. We need more fine-grained studies like this and Frederick Wiseman's 'In Jackson Heights,' that take us into the life of a city and show us the dynamics of what one commentator here calls 'learning through adaptation.' "

"A celebration of how people in an area can cooperate to help recover from the damage done to their community."

"An important film on many levels...soundtrack [is] excellent."