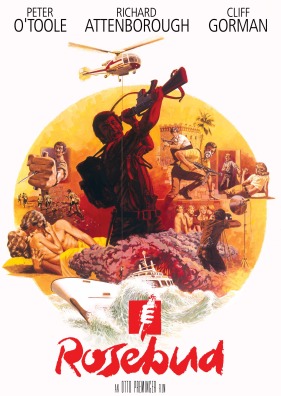 From Otto Preminger, the legendary director of Laura, Anatomy of a Murder, Exodus, Advise & Consent and Bunny Lake Is Missing, comes this thrilling adventure yarn starring screen greats Sir Peter O’Toole (Lawrence of Arabia, The Lion in Winter) and Sir Richard Attenborough (The Great Escape, Brighton Rock). Larry Martin (O’Toole) is a reporter secretly working for the CIA as he travels around the globe tasked, along with Israeli intelligence, to work for the release of five wealthy girls kidnapped by the anti-Israel Palestinian Liberation Army from the yacht Rosebud. Edward Sloat (Attenborough), the extremist head of Black September, is connected with the kidnappings, and is subsequently hunted down after his plans for a centralized global terrorist network are uncovered. The stellar cast includes Cliff Gorman (The Boys in the Band), Peter Lawford (Salt and Pepper), Raf Vallone (Cannon for Cordoba), Adrienne Corri (The File of the Golden Goose), Isabelle Huppert (The Bedroom Window) and Kim Cattrall (The Return of the Musketeers).