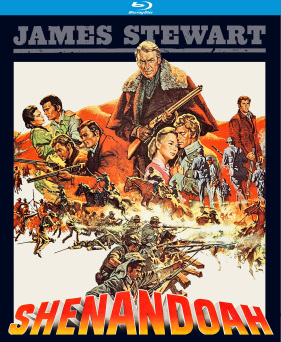 From Andrew V. McLaglen, the acclaimed director of McLintock!, The Rare Breed, The Way West, The Devil’s Brigade, Ffolkes and The Wild Geese, comes this classic Civil War drama starring the great James Stewart (Broken Arrow, Bend of the River). Stewart stars as Charlie Anderson, a wealthy Virginia farmer who refuses to support the Confederacy because he is opposed to slavery, yet refuses to support the Union because he is deeply opposed to war. When his son is taken prisoner and he goes to search for the boy, Charlie sees firsthand the horrors of war and is at last forced to take his stand. This anti-war, pro-family western co-stars Doug McClure (TV’s The Virginian), Glenn Corbett (Chisum), Patrick Wayne (Big Jake), Phillip Alford (To Kill a Mockingbird) and, in their film debuts, Rosemary Forsyth (Texas Across the River) and Katharine Ross (Butch Cassidy and the Sundance Kid).