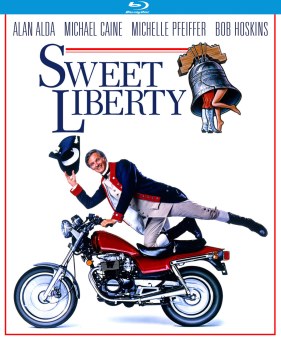 It’s Alan Alda (Betsy’s Wedding) versus Hollywood in the writer/director/star’s hilarious comedy about moviemaking in a small town. College history professor Michael Burgess’ (Alda) life and town are turned upside down when a film company arrives to make a movie out of his best-selling book on the American Revolution. To Professor Burgess’ horror, the leading man (Michael Caine, Blame It on Rio) is a philandering adventurer, the movie’s director (Saul Rubinek, Nixon) wants to turn his historic novel into a youth-oriented lusty romp and the female star (Michelle Pfeiffer, Married to the Mob) is so obsessed by Alda’s heroine, he begins to fall in love with the zany actress. Brimming with charm and gentle humor and co-starring Bob Hoskins (Hollywoodland), Lois Chiles (Death on the Nile), Linda Thorson (Tara King of TV’s The Avengers) and Lillian Gish (The Whales of August), Sweet Liberty is a delightful comic confection!