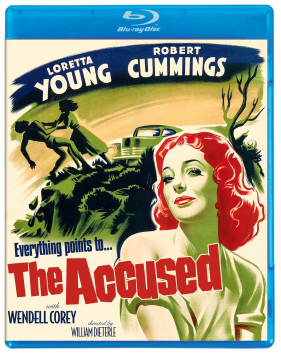 Loretta Young (The Stranger, The Farmer’s Daughter) and Robert Cummings (The Bride Wore Boots, Dial M for Murder) star in the film noir classic The Accused, a story about one woman’s successful self-defense during a struggle which leads to the death of her attacker. Psychology professor Wilma Tuttle (Young) allows a male student of hers to drive her home. While en route, he attempts to rape her but is killed when his teacher fights back. After fleeing the scene, Wilma is overcome with feelings of guilt while following the murder investigation by Homicide Lt. Dorgan (Wendell Corey, I Walk Alone, Rear Window) and comforting her love interest Warren Ford (Cummings), who also happens to be her attacker’s guardian. Directed by William Dieterle (I’ll Be Seeing You, Portrait of Jennie) and shot by Milton R. Krasner (All About Eve, Love with the Proper Stranger), this brilliantly acted drama dives into the psyche of a woman torn apart by emotional violence.