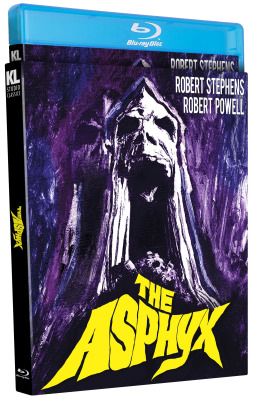 Available: Jan 31st 2023. Pre-orders are generally sent several says in advance of street date. Order may not be split.

Blending elements of Gothic horror with the more contemporary ingredients of steampunk, The Asphyx has emerged from obscurity to become a cult favorite of the sci-fi/fantasy genre. Utilizing an experimental photographic device, a scientist (Robert Stephens, The Private Life of Sherlock Holmes) captures what appears to be the image of the Asphyx—the ancient Greek spirit of the dead. With the help of his adopted son (Robert Powell, The Italian Job), he conducts further experiments and conceives of a way to harness the Asphyx and thereby gain immortality. But, as every visionary scientist should know, defying the laws of the natural and spiritual world unleashes dreadful consequences. Sumptuously shot by director Peter Newbrook and cinematographer Freddie Young (Lawrence of Arabia), The Asphyx unfolds into one of the most unusual and haunting supernatural chillers of British cinema. This special edition also includes the extended 99-minute cut of film.