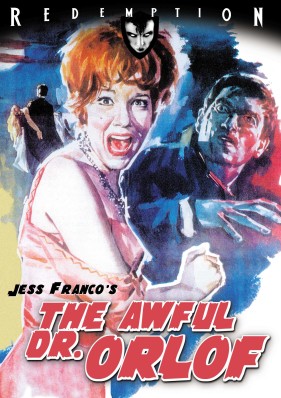 Generally considered the first horror film produced in Spain, THE AWFUL DR. ORLOF (L'horrible Docteur Orlof ) launched the career of cult cinema's most colorful figure: Jesus "Jess" Franco. Cloaking the story in the visual style of the British gothic film, Franco injected ORLOF with the kind of morbid eroticism that would quickly become his signature (and is presented here in the uncensored French release version).

Howard Vernon stars as a diabolical surgeon who, with the help of his blind minion Morpho (Ricardo Valle), lures beautiful women into the operating room of his stone castle, so they may provide the raw materials for a series of experimental face grafts for his disfigured daughter.

• Mastered in HD from an archival 35mm print

• "The Horror of Orlof" a 16-minute interview with Jess Franco, directed by David Gregory, produced by Elijah Drenner

• "The Young Dr. Orlof Chronicles" a 19-minute documentary by Daniel Gouyette on the making of the film

• "Jess! What Are You Doing Now?" an 8-minute homage to Jess Franco by Daniel Gouyette, featuring interviews with Franco's friends and collaborators