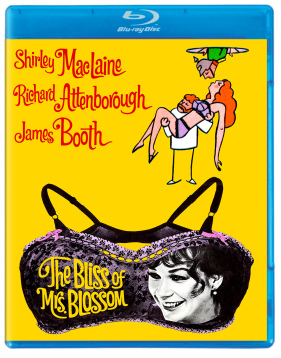 The Bliss of Mrs. Blossom (Blu-ray)

Available: Feb 28th 2023. Pre-orders are generally sent several says in advance of street date. Order may not be split.

Harriet Blossom (Shirley MacLaine, The Apartment) isn’t happy with her marriage to priggish bra manufacturer Robert (Richard Attenborough, The Great Escape), but there’s no reason for concern. Harriet gets by with a little help from above—she keeps a lover in the attic! And years later, when hubby finally notices, the end result of her secret tryst may not be what you expect at all. The marital/extramarital comedy The Bliss of Mrs. Blossom blooms with tongue-in-cheek fun, brilliantly bent performances (including Monty Python trouper John Cleese’s cameo portrayal of an exasperated postal clerk) and a colorful splash of paisleyed ’60s—London style. Based on the play by Alec Coppel (Vertigo), directed by Joseph McGrath (Casino Royale) and co-starring James Booth (Robbery), it’s “something a little different, even original…with a neat climactic twist” (The New York Times).