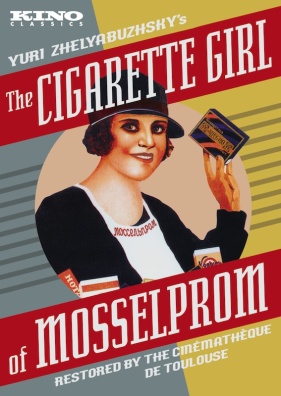 The Cigarette Girl of Mosselprom (DVD)

A delightful and boisterous comedy satirizing Soviet life and the making of movies in the 1920's. Zina, a cigarette girl, is loved by a middle-aged assistant bookkeeper, but before he can declare his affections, a movie company discovers and hires Zina as an actress. On the set, Zina meets the movie's cameraman and they fall in love. All seems lost when the studio, an American businessman and fate tear them apart and Zina has to return to her old job. But in the end, love triumphs in a fresh, appealing and marvelous fashion.

Yuri Zhelyabuzhsky received his early training with the famous Russ Collective where he started off as a cameraman. The Cigarette Girl of Mosselprom, though declared a "bourgeois comedy," was one of the most successful of all Russian silent films and remains the director's greatest work of art.

The Cigarette Girl of Mosselprom

The Cigarette Girl of Mosselprom