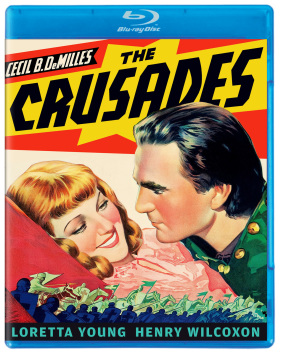 Master filmmaker Cecil B. DeMille (The Sign of the Cross, Cleopatra, The Ten Commandments) combines religious fervor and a stirring love story in one of his greatest screen spectacles, The Crusades. Christians in Medieval Europe are planning war against the Saracens, who have taken over the Holy City of Jerusalem. In order to obtain supplies for his soldiers, England’s king, Richard the Lion-Hearted (Henry Wilcoxon, Unconquered), is forced to marry a princess (Loretta Young, The Stranger) he has never met. The two are soon involved in a treacherous battle for survival of the Holy City—and of their love. This powerful epic unfolds in true DeMille fashion, bringing the past to glorious life as a cast of thousands creates “the kind of excitement that pulls an audience irresistibly to the edge of its seat” (The New York Times).