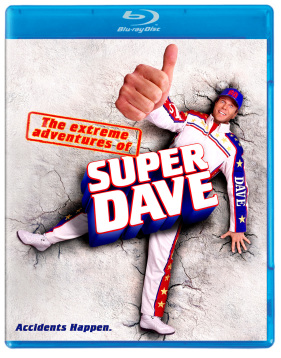 Break out the body-casts! The world’s most painfully hilarious stuntman is back with a powder-keg of laughs! Super Dave Osborne (Bob Einstein, TV’s Curb Your Enthusiasm) gives a crash course in comedy in this wacky adventure of daredevil antics, whiplash humor and crash-test love that’ll break every funny bone in your body! Things couldn’t get much worse for Super Dave. After a near-fatal accident he discovers that he’s been bankrupted by his swindling manager and foreclosed on by the bank. Devastated and ready to hang up his crash helmet, Super Dave finds strength in a klutzy-but-cute single mom (Gia Carides, Austin Powers: The Spy Who Shagged Me) and her ailing young son, Timmy. And when he learns that Timmy needs an expensive heart operation, Super Dave shuns retirement to raise the money. Even if it means facing off against his arch enemy, Gil (Dan Hedaya, The Crew), a slimy sports promoter, to once again prove that he’s not only the most outrageous daredevil…he’s also the most accident-prone! Directed by Peter MacDonald (Rambo III, Mo’ Money) and featuring cameos by music legend Ray Charles, NFL giant John Elway, boxing great Evander Holyfield and ring announcer extraordinaire Michael Buffer.