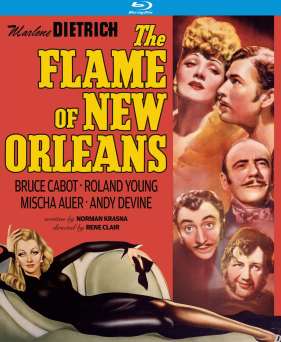 The Flame of New Orleans (Blu-ray)

From René Clair, the acclaimed director of Le Million, À Nous la Liberté, And Then There Were None and I Married a Witch, comes this romantic comedy starring screen icon Marlene Dietrich (The Blue Angel, Desire, Witness for the Prosecution). In the mid-18th century, the impoverished Countess Claire Ledoux (Dietrich) arrives in New Orleans with only one thing on her mind—to marry a man of means. And with her engagement to gentleman Charles Giraud (Roland Young, The Young at Heart, Topper), it appears to be smooth seas ahead… until dashing Captain Robert Latour (Bruce Cabot, King Kong, Dodge City) storms into town and takes the wind out of her sails and leaves her heart fluttering. Though it takes fainting spells and double identities to delay and disguise the truth, the Countess soon discovers that the greatest treasure of all—a heart of gold—is worth more than a pot of it. Beautifully shot by Rudolph Maté (Foreign Correspondent, Gilda) and wonderfully written by Norman Krasna (White Christmas, Let’s Make Love) with a stellar supporting cast that includes Mischa Auer (My Man Godfrey), Andy Devine (A Star is Born) and legendary Stooge Shemp Howard (Scrambled Brains). Oscar nominee for Art Direction-Interior Decoration (Black-and-White).