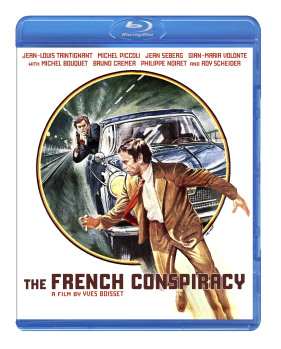 The French Conspiracy aka L'Attentat / The Assassination / Plot (Blu-ray)

Discovering that exiled Algerian OAS terrorist Sadiel (Gian Maria Volontè, For a Few Dollars More) is about to return to France, both the CIA and the French Secret Service go on red alert. They blackmail a journalist, François Darien (Jean-Louis Trintignant, The Conformist), into helping them to entice Sadiel to Paris, in order to assassinate him. Meanwhile Michael Howard (Roy Scheider, The Seven-Ups) discovers the double-cross, only to be warned off by the CIA, who are quite happy to have the French dig their own political grave. A taut, gripping drama unfolds, as two secret service agencies fight for superiority on the streets of Paris. Yves Boisset (Dog Day) directed this political thriller based largely on the true story of the Mehdi Ben Barka affair, with music by the great Ennio Morricone (The Sicilian Clan) and a loaded international cast including Michel Piccoli (Max and the Junkmen), Jean Seberg (Breathless), Michel Bouquet (The Unfaithful Wife), Bruno Cremer (Sorcerer), Daniel Ivernel (Ulysses), Philippe Noiret (Topaz), François Périer (Le Samouraï) and Nigel Davenport (Phase IV).

Includes both the Original French and English Dub Cuts