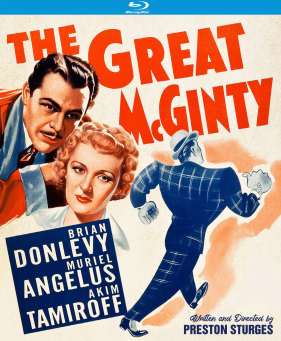 From Preston Sturges, the legendary writer/director of Christmas in July, The Lady Eve, The Palm Beach Story and Unfaithfully Yours comes this classic comedy about an opportunist who turns corruption into a promising political career, but struggles to stay on top when he tries to go honest. Dan McGinty (Brian Donlevy, The Quatermass Xperiment) is a hungry hobo who wows the ballot-stuffers by voting 37 times in an election for Mayor. He immediately becomes the protégé of “The Boss” (Akim Tamiroff, After the Fox), who guides and schemes McGinty to Alderman, Mayor and ultimately Governor with a series of payoffs, kickbacks and bribes. In trouble, McGinty flees the country and winds up (or down) as a bartender in a seedy Central American dive where the tale has a gleeful surprise ending. The Great McGinty, a high-spirited comedy of rogues and rascals, won the 1941 Oscar for Best Original Screenplay (Sturges).