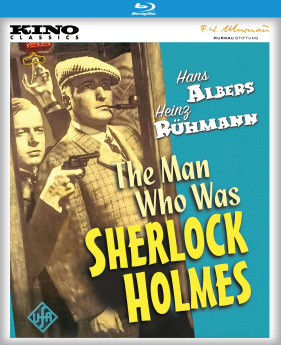 The Man Who Was Sherlock Holmes (Blu-ray)

In this fast-paced mystery-thriller, Hans Albers (mid-century Germany’s most popular leading man) stars as a pipe-smoking super-sleuth who may—or may not—be Arthur Conan Doyle’s legendary detective. Traveling under the name Morris Flint with his Watson-like sidekick Macky (Heinz Rühmann), but possessing the unmistakable bearing of the renowned criminologist, he employs his charm, wit and powers of deduction to penetrate an elaborate criminal conspiracy. While it appears light-hearted on the surface, The Man Who Was Sherlock Holmes (also released as Two Merry Adventurers) subtly reflects the troubled era in which it was made: 1937 Germany under the Third Reich. Its protagonist navigates a labyrinthine world in which everyone conceals secrets, truth is elusive, and heroes and charlatans are indistinguishable. Thanks to Albers’s roguish charisma and the sure-handed direction of Karl Hartl (Gold, F.P.1 Doesn’t Answer), the film hides its cynical undertones beneath a layer of effervescence, making The Man Who Was Sherlock Holmes a playful yet dark mirror maze of romantic intrigue.