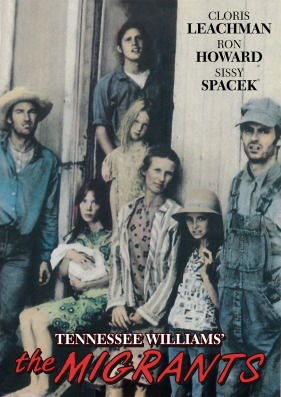 Their only crime was to be born poor. Their only chance lay in their hearts. They rise every morning with the sun and work the fields all day. Cloris Leachman (The Last Picture Show), Sissy Spacek (Coal Miner’s Daughter) and Ron Howard (TV’s Happy Days) star in this story of a simple family, a family that worked hard, loved each other and hoped their hard work would produce a better life for them. And in the eyes of the son, lay the hope that allows a man to rise beyond his circumstances and like so many others, remain trapped inside a fading American dream. Produced and directed by Tom Gries (TV’s Helter Skelter), teleplay by Lanford Wilson (TV’s The Rimers of Eldritch), based on a story by Tennessee Williams (A Streetcar Named Desire). The stellar cast also includes Cindy Williams (TV’s Laverne & Shirley), Ed Lauter (The Longest Yard), Mills Watson (TV’s The Misadventures of Sheriff Lobo and B.J. and the Bear) and David Clennon (Missing).

(The Thirty Best Television Movies Ever… Cloris Leachman was brilliant in this searing adaptation of Tennessee Williams’ story about the plight of migrant farm workers. In subject matter, there’s been nothing to equal it since) – LOS ANGELES TIMES