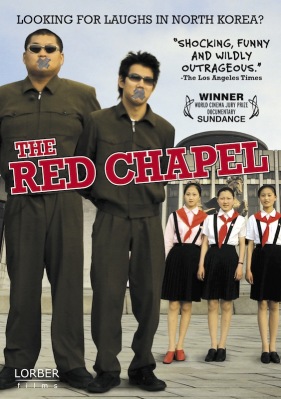 Combining the muckraking spirit of Michael Moore with the confrontational comedy of Borat, The Red Chapel is a one-of-a-kind documentary that reveals the injustices of North Korea with a hilariously dark wit. In this Sundance Grand Jury Prize-winning film, a trio of Danish comedians, who call themselves "The Red Chapel" pretend to be regime sympathizers and mount an absurd variety show in Pyongyang. This stunt is led by the acerbic director Mads Brügger, and assisted by Simon Jul and Jacob Nossell, two performers of South Korean descent. Constantly shadowed by their guide, Mrs. Pak, they fake allegiance to Kim Jong-il and hope for “One Korea.” Only Jacob is allowed to speak his mind. Suffering from cerebral palsy, his halting speech is impossible to translate, so he insults his socialist hosts and receives smiles in return. The Red Chapel is an unconventional, hilarious and damning peek into a totalitarian nightmare.