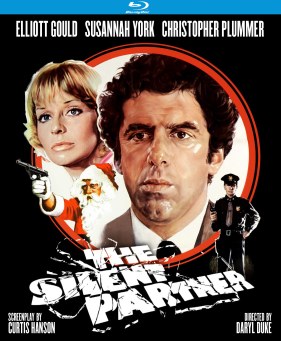 A masterpiece of cunning and suspense… Miles Cullen (Elliott Gould, The Long Goodbye) discovers how interesting life can be when he is transformed from mild-mannered bank teller into daring, ingenious bank robber in a matter of seconds. Held up at the bank by the criminal Reikle (Christopher Plummer, Ordeal by Innocence), Miles manages to stash most of the money in a deposit box first. When Reikle realizes he’s been shortchanged, he plans to take revenge—and a great battle of wits ensues. To keep the money, Miles reaches new heights of courage, seducing the robber’s girlfriend (Céline Lomez, Plague) and his boss’s mistress (Susannah York, The Killing of Sister George). Filled with equal parts intrigue, romance and unexpected twists, this chilling psychological thriller also features comedy legend John Candy (Delirious) in an early film role. The screenplay by future filmmaker extraordinaire Curtis Hanson (L.A. Confidential) was based on the book Think of a Number by Anders Bodelsen. Wonderfully directed by Daryl Duke (Payday).