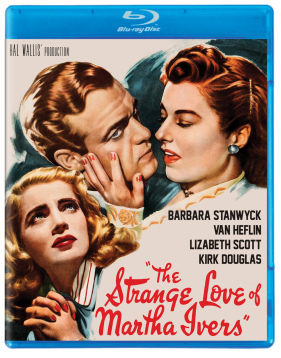 Barbara Stanwyck, the legendary actress who defined the film noir femme fatale in 1944’s Double Indemnity, returns to the role of the deadly seductress in The Strange Love of Martha Ivers. When streetwise gambler Sam Masterson (Van Heflin, Shane) returns to his hometown of Iverstown, childhood sweetheart Martha (Stanwyck) assumes he has come to blackmail her over the suspicious death of her aunt, which he witnessed years earlier. Thus begins a dangerous game of cat and mouse, in which the wealthy and powerful Martha, whose husband is the local district attorney (the film debut of Kirk Douglas, I Walk Alone), tries to threaten, connive and seduce the truth from Sam’s clenched lips. Lizabeth Scott (Pitfall) co-stars as a hard-boiled woman on probation whose attempts to go straight land her, ironically, in Iverstown’s vortex of circling sharks. Directed by Lewis Milestone (The General Died at Dawn), scripted by Robert Rossen (The Hustler) and scored by Miklós Rózsa (Spellbound), Martha Ivers is a razor-witted dance of death that represents Hollywood suspense at its most sublimely entertaining.