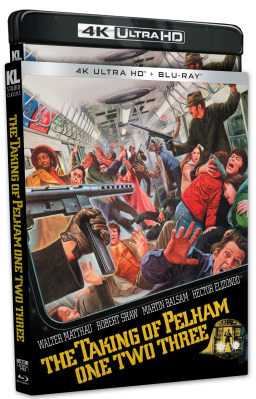 The Taking of Pelham One Two Three (4KUHD) (4K UHD)

Available: Dec 20th 2022. Pre-orders are generally sent several says in advance of street date. Order may not be split.

Screen legends Walter Matthau (Charley Varrick) and Robert Shaw (Force 10 from Navarone) team up with Martin Balsam (After the Fox) and Hector Elizondo (Valdez is Coming) to deliver a sure-fire entertainment that's gripping and exciting from beginning to end and is guaranteed to give you the ride of your life. A gang of armed professionals hijack a New York subway train somewhere outside the Pelham station threatening to kill one hostage per minute unless their demands are met. Forced to stall these unknown assailants until a ransom is delivered or a rescue is made, transit chief Lt. Garber (Matthau) must shrewdly outmaneuver one of the craftiest and cruelest villains (Shaw) in a battle of wits that will either end heroically or tragically. Featuring masterful direction by Joseph Sargent (White Lightning), gorgeous widescreen cinematography by Owen Roizman (The French Connection), a classic rousing score by David Shire (The Conversation) and top-notch editing by Jerry Greenberg (Apocalypse Now) and Robert Q. Lovett (Cotton Comes to Harlem).