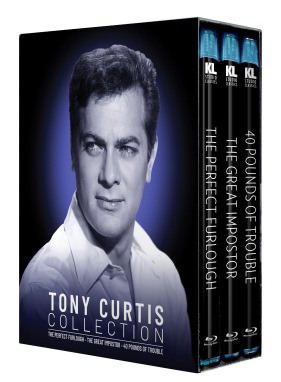 This collection includes three classic comedies starring screen legend Tony Curtis. THE PERFECT FURLOUGH (1958) From Blake Edwards, the acclaimed director of Breakfast at Tiffany’s, The Pink Panther, A Shot in the Dark, The Great Race, The Party and Victor Victoria, comes this romantic comedy starring screen legends Tony Curtis (The Great Impostor) and Janet Leigh (The Vikings). In The Perfect Furlough, the fun begins when the Army’s top brass meet to discuss the morale problems occurring at an outpost in the remote Arctic. It seems that the 104 bachelors stationed there for the past seven months are going utterly stir crazy. Military psychologist Lieutenant Vicki Loren (Leigh) proposes a solution: one lucky guy will receive a perfect furlough, complete with exotic destinations and a beautiful movie star. Much to the psychologist’s chagrin, a scheming corporal (Curtis) with a personnel file that reads like a stag movie rigs the raffle and wins the trip. So, it’s off to Paris for three weeks of fun and romance—and constant supervision by Lieutenant Loren and a pack of Hollywood press agents who are fighting to keep both the Army’s and the movie star’s reputations intact. But things get really complicated when the lieutenant finds herself falling for the hot-blooded corporal. Sharply written by Stanley Shapiro (Pillow Talk) and co-starring Keenan Wynn (Dr. Strangelove), Linda Cristal (Mr. Majestyk) and Elaine Stritch (Monster-in-Law). THE GREAT IMPOSTOR (1960) From Robert Mulligan, the outstanding director of To Kill a Mockingbird, Love with the Proper Stranger, Baby the Rain Must Fall, Summer of ’42 and The Nickel Ride, comes this wild account of the world’s greatest big-time masquerader, Ferdinand Waldo Demara Jr. (Tony Curtis, The Perfect Furlough). The incredible but true story tells of how the untrained, uneducated yet brilliant young man assumes the identity of a college professor, Trappist monk, prison warden and surgeon in the Canadian Navy. Always one step ahead of exposure, Demara attempts to outwit and outrun the FBI, the police, a priest and several girlfriends. Mixing suspense with humor, The Great Impostor was beautifully shot by Robert Burks (To Catch a Thief), features a wonderful score by the great Henry Mancini (Charade) and co-stars Karl Malden (Billion Dollar Brain), Edmond O’Brien (The Hitch-Hiker), Arthur O’Connell (Man of the West), Gary Merrill (Witness to Murder), Joan Blackman (Visit to a Small Planet), Raymond Massey (Reap the Wild Wind) and Jeanette Nolan (Macbeth). 40 POUNDS OF TROUBLE (1962) From Norman Jewison, the legendary director of The Russians Are Coming! The Russians Are Coming!, In the Heat of the Night, The Thomas Crown Affair, Fiddler on the Roof, A Soldier’s Story and Moonstruck, comes this classic comedy starring Tony Curtis (The Great Impostor). After escaping from his greedy ex-wife in California, savvy Lake Tahoe hotel/casino manager Steve McCluskey (Curtis) has had enough of women. His sabbatical is sabotaged, however, when hotel owner Bernie Friedman (Phil Silvers, Buona Sera, Mrs. Campbell) orders him to chaperone the venue’s new headliner, Friedman’s beautiful niece Chris (Suzanne Pleshette, Support Your Local Gunfighter). As if that’s not enough, McCluskey inherits a pint-sized problem in young Penny (Claire Wilcox, Wives and Lovers), a five-year-old recently abandoned by her debt-ridden father. Soon charmed by his two charges, he risks crossing the Nevada border to take them to Disneyland. It’s not long before the incognito trio is discovered by his ex’s detectives and a wild chase through the park’s attractions begins. Written by Marion Hargrove (The Music Man) based on the story “Little Miss Marker” and featuring a hilarious cast that includes Larry Storch (TV’s F Troop), Howard Morris (High Anxiety), Stubby Kaye (Guys and Dolls), Mary Murphy (A Man Alone), Edward Andrews (Send Me No Flowers), Karen Steele (Ride Lonesome), Kevin McCarthy (Invasion of the Body Snatchers) and Warren Stevens (Madame X). 40 Pounds of Trouble, the first feature film ever to be shot in (and above) Disneyland, is an irresistible romantic comedy and a treat for the whole family.