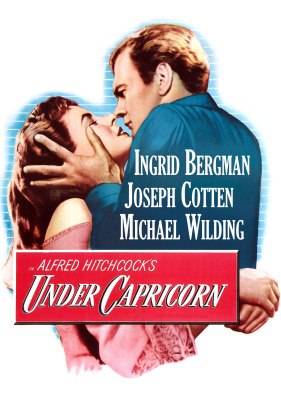 Brand New 4K Restoration! Mystery, murder and passion from the master of suspense, Alfred Hitchcock (Lifeboat, Psycho). Screen legends Ingrid Bergman (Joan of Arc, Intermezzo) and Joseph Cotten (Portrait of Jennie, The Farmer’s Daughter) star in Under Capricorn, a lush Technicolor drama. Cotten plays Sam Flusky, a native Briton banished to Australia for murder. Bergman is his wife, Henrietta, the disturbed sister of the man Flusky was convicted of killing. When a new governor (Cecil Parker, 23 Paces to Baker Street) arrives, he brings with him his cousin Adare (Michael Wilding, Stage Fright), an old friend of Henrietta's, who sets out to help her conquer her demons and return her life to normal. But is Henrietta going insane, or is someone trying to drive her mad? Is she merely an alcoholic, or is someone trying to poison her? No one but Hitchcock could handle these questions with such surefire tension, and the performances by the entire cast are excellent. A rich account of emotional self-sacrifice, Under Capricorn is that rare film which captures the humanity of its characters while keeping the audience on the edge of their seats. Beautifully shot by Jack Cardiff (Black Narcissus).